This search form uses an instant search feature. As you type, search results will appear automatically below the search field. When you've entered you desired search terms use tab to navigate through the available results and hit enter to open the selected page or document.
EDIT MAIN

Mr. Readnour graduated from Southeast Missouri State University in 1990 with a Bachelors Degree in Geology. He then went back to school and finished a degree in Math Education in 1992. In the Fall of 1992, Mr. Readnour began teaching and coaching at Herculaneum High School. He taught Tech Math, Algebra I, and Geometry, as well as coached junior varsity and varsity boys basketball. He started working on his administrative degree at Southeast Missouri State University.

After teaching and coaching in Herculaneum for 6 years, he moved to Lindbergh High in South St. Louis County. He continued to teach math and coach freshman basketball. Mr. Readnour taught Algebra I, Geometry, Algebra II, and Pre-Calculus. Upon completion of his Masters Degree, Mr. Readnour became in charge of the summer school program, grades 5-12.

In the Fall of 2001, Mr. Readnour was hired as the assistant principal at Hillsboro High School.After a 2 year stint at the high school, he accepted the position as the Intermediate School Principal.

In the Spring of 2011, Mr. Readnour finished his Educational Specialist degree from Missouri Baptist University.

He has a wonderful wife, who is a teacher, and three beautiful children. He enjoys the mountains, beaches, spending time with his family, and preaching. 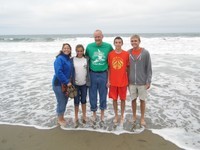 Mr. Readnour and a long time Friend of the Intermediate, Walt Crawford. He will be dearly missed!!!