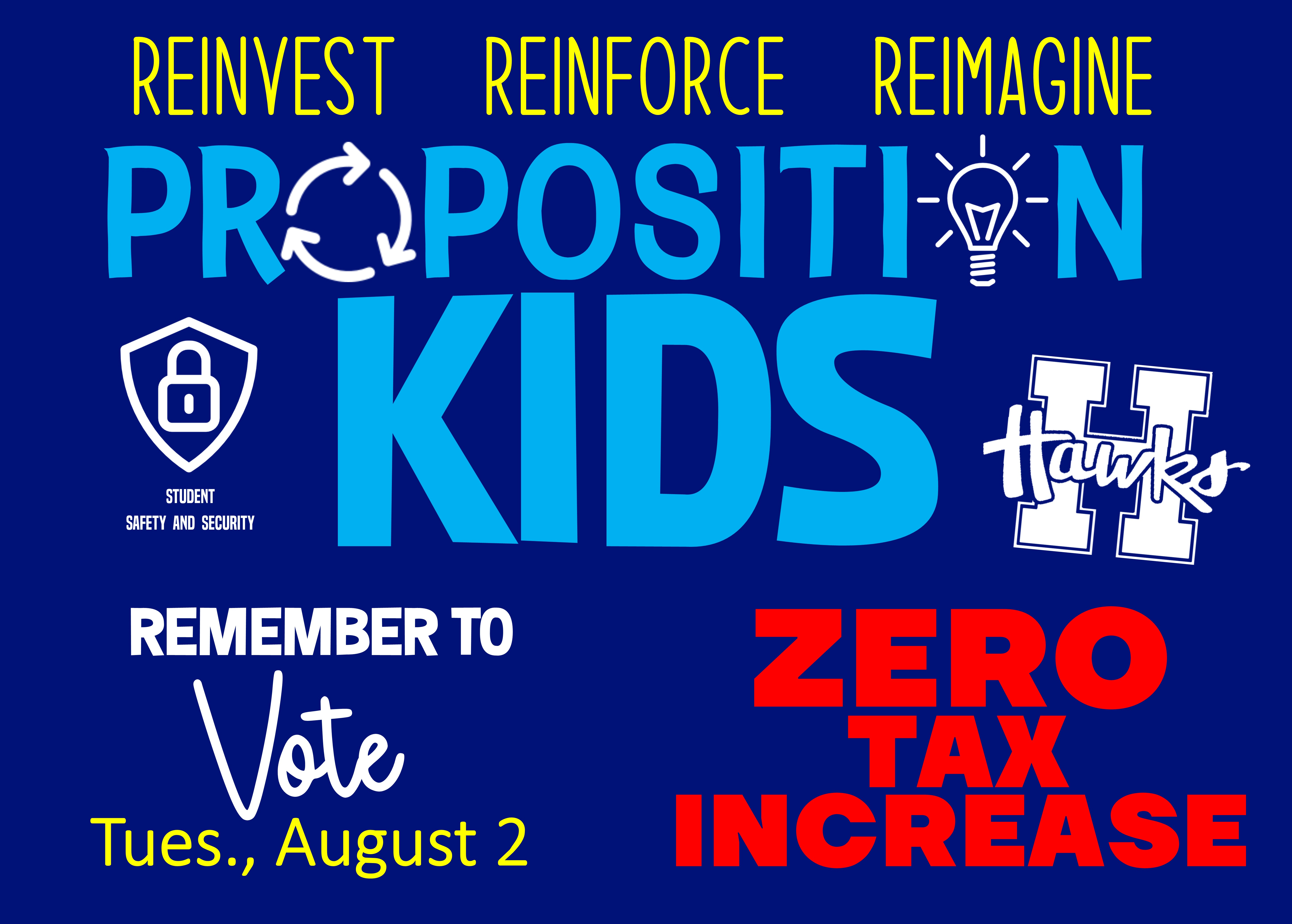 The Board approved placing the $25 million Bond Issue on the August 2 Ballot. This is a very important issue for the district, long term. Should Proposition KIDS not pass this August, the overall tax rate would roll back overtime from Debt Service Fund (mortgage). This would force the district to use money from the Operating Fund (student and teacher money) for repairs and things normally paid for with the Debt Service Fund. Furthermore, to correct this, any future tax measure would then be a tax increase issue.

What is it?
The district is looking to refinance it's debt and "cash out" $25 million for the purpose of capital expenditures.

In short, it is what homeowners do when they use the equity in their home and refinance their mortgage for the purpose of redoing a kitchen, sunroom, roof, or some other project.

Their would be no increase in the overall tax rate. The debt would be extended approximately 8 years.

If you would like to assist in communicating information out to a community, we invite you to our next meeting on July 20, 2022 at 9:00 am in the Board Room at the Learning Center.

Have Questions about Proposition KIDS?
Click the link below to hear Dr. Isaacson on KJFF 1400 AM Radio discussing Proposition KIDS ballot measure - Tuesday, August 2nd - MP4 link > https://5il.co/1dzoe
Questions addressed in the Hillsboro School Report include:
1. What is the bond issue?
2. Why is it important?
3. What are your going to do with the money?
4. Is it going to raise my taxes?
5. Why did you sell Hwy A and Buy the Farm?
6. What are the past Bond Issue Projects?
7. What did you use Esser Funds on?
We will have a written transcript available very soon, and will post link once completed. 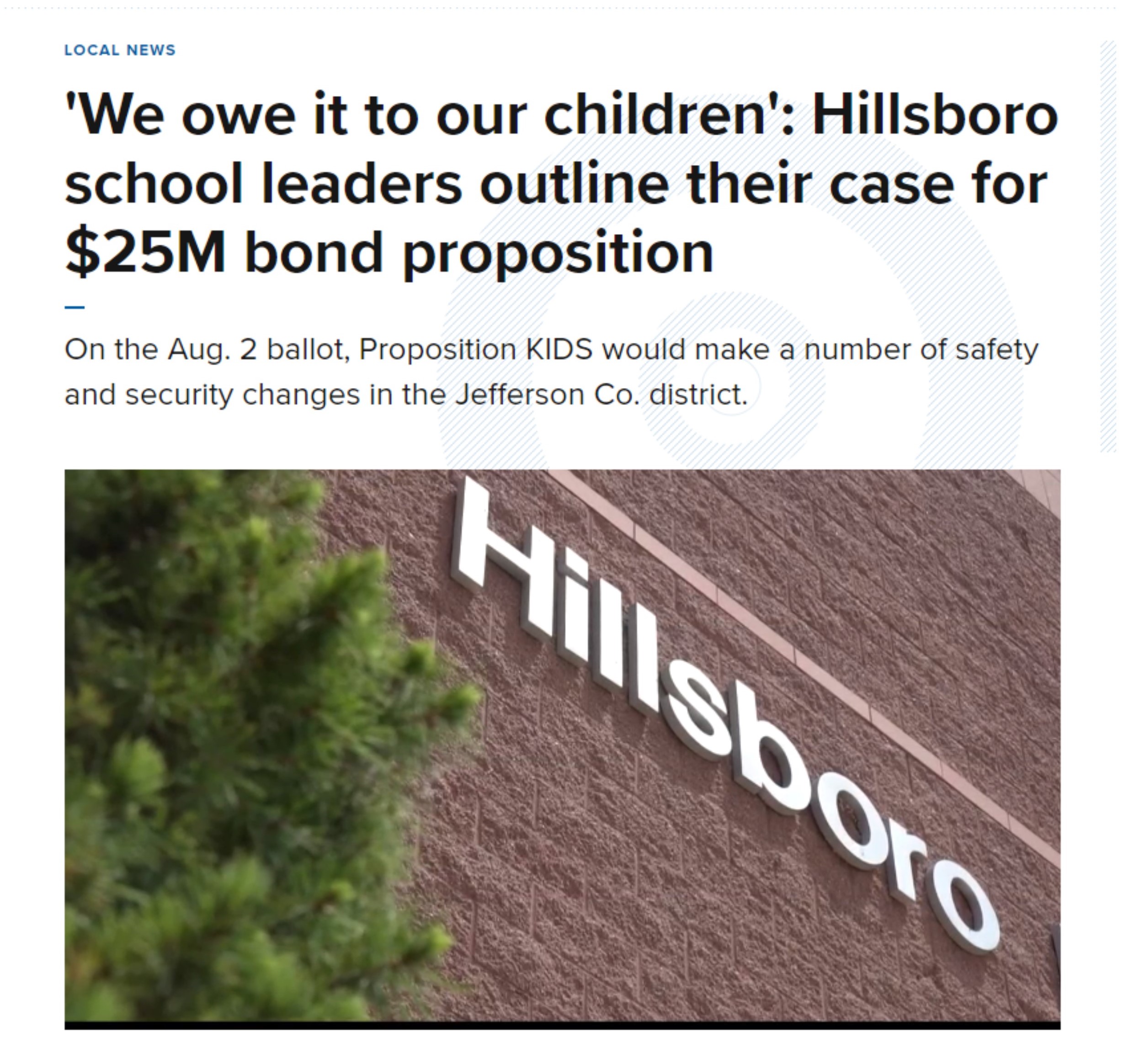 "We owe it to our children": Hillsboro school leaders outline their case for $25M bond issue

It's the district's only school without a secure entrance, something of a concern after years of school shootings around the country.

"I'm not naïve enough to think that could never happen at Hillsboro," Isaacson said. "So we owe it to our children and we owe it to the parents and our community that we have the most secure school that we can provide to do what we can to ensure that our students feel safe."

It's one of the projects that Isaacson would fund with the $25M Proposition KIDS bond proposition on the Aug. 2 ballot.

Isaacson stressed that the current tax rate would not increase. Rather, he likens it to refinancing a home mortgage.

Proposition KIDS would refinance the district's existing debt and extend repayment for an additional eight years for the various projects.

Though he acknowledges that this might be a hard sell in the current economy.

"I feel like the support is there. Am I cognizant and worried about the current economics? Yeah. It impacts people, and I understand that financially," he said.

Another project — upgrading the district's bus fleet with 360-degree cameras — was set in motion after another tragedy: the death of a 6-year-old Jefferson County student caused by a bus accident.

"There was a tragedy, and it happened on my birthday," businessman Bobby Griffy said. "We were out having dinner, and my business partner said 'hey we have to be able to do something about this.'"

Griffy's worked with the district to install 360-degree cameras on a number of Hillsboro's buses and said Prop KIDS provides funds for the rest of the fleet.

"We got one on there, and we thought 'hey, this is a no-brainer. Why is it not on every bus?' It just felt great. It was a very positive thing for us." he said.

"The moment we take students away from the doorstep, they are ours to protect until we return them to their parents," Isaacson said. "Anything that we can do to ensure that, we are going to do."

One more project on the list came from an unlikely source: a Girl Scout troop that asked for increased security along Leon Hall Parkway.

"It is very important for the safety of kids with the enormous amount of traffic that we have in school," Mayor Buddy Russell said of the request, which was one of the first he received after taking over the mayor's office in 2019.

Russell said he worked with the school district to determine they could add a right-turn lane and crosswalk for the intersection that serves several schools.

Issacson adds that a lot of the district's parents started driving their kids to school early on in the pandemic, a trend that has not reversed over time.

"We're proud of our Girl Scouts for doing that," Isaacson said with a pile of the scout's letters on his desk.

He said he's hopeful they'll get the funds they need, though he still worries about the economy's impact.

"We are coming out of a global pandemic. Gas is five dollars a gallon. All those different things where money is tight... And we also understand that we are the largest number on the personal property tax," Isaacson said.

If the proposition fails on Aug. 2, Isaacson said the district would have to dip into the operating fund, and — potentially — any future tax measure would then be a tax increase issue. 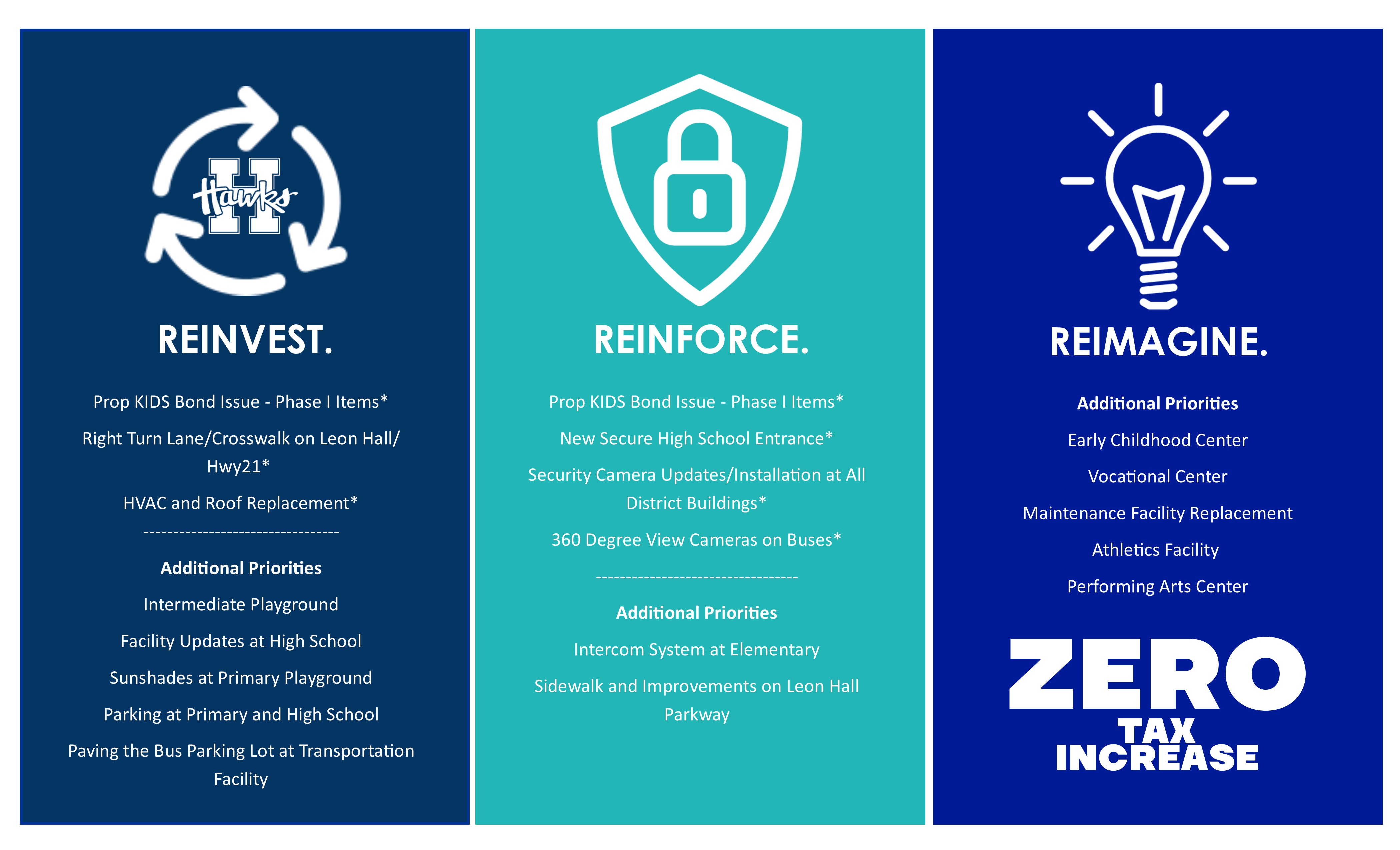 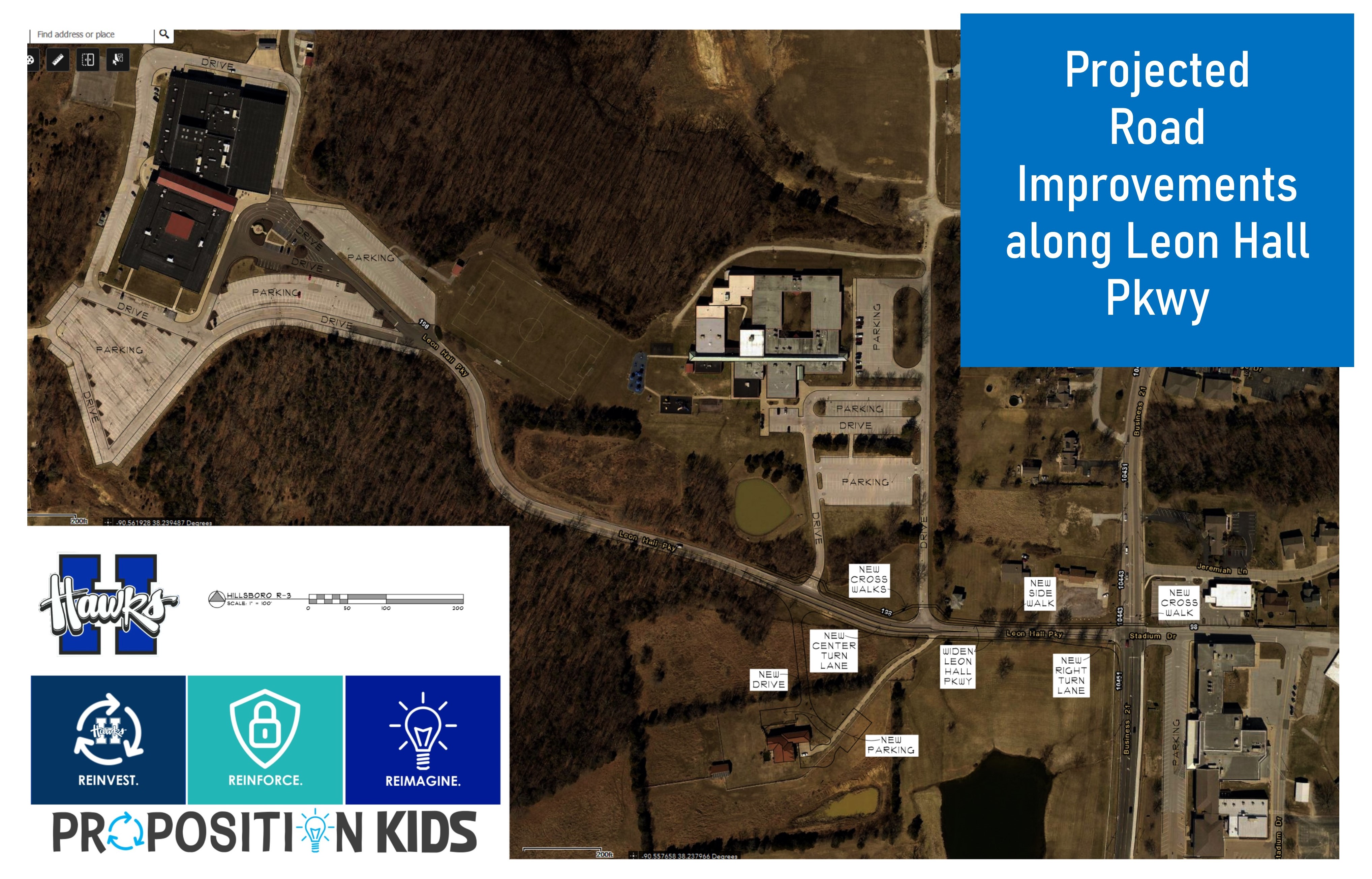 A survey was sent out to employees, parents, and the community to gather input on what they would support and what was viewed as an immediate priority. The results were consistent amongst all groups. Safety and Security and addressing HVAC and Roof issues were the viewed as the most important items.

All of the items that were put forth in the survey are viewed as items that we will be addressing in the immediate and the future. However, we need to have a starting point. We are going to work to get as far thru the list as possible, but do not know what each item will cost. In addition, there may be other ways to accomplish these priorities by repurposing current facilities.

The items that the Board approved us to inform the public as focus areas with the bond funds are:

1st Phase Items to be completed with $25 Million: (assumes all items would not exceed $25 million)

1.      New Secure Entrance to the High School - (Other HS facility issues would presumably would be included)

2nd Phase Items: (items will be addressed based on remaining funds after 1st Phase- the order will be based on amount remaining and costs)